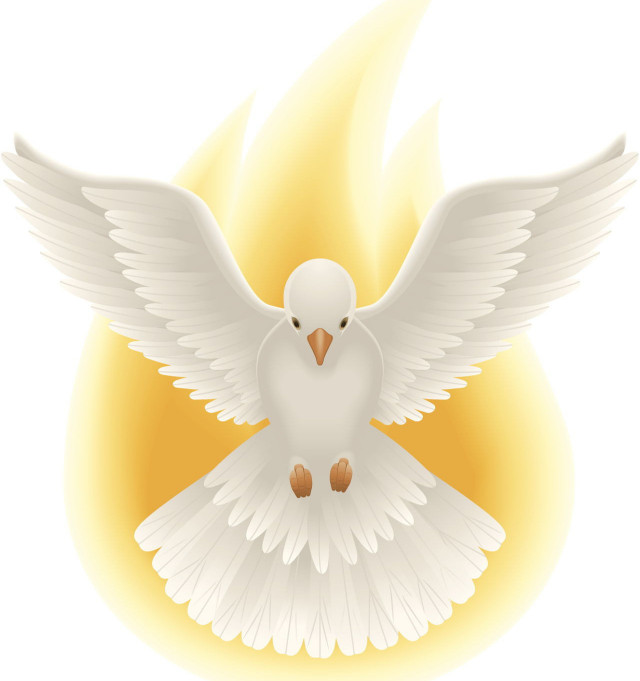 It is July and we have passed the halfway point of 2021.  Although time seems to be flying on one front, I continue to find myself caught up in a timelessness found in the Lord Himself.  It feels as if, at any given moment, I could break down crying in the presence of the Lord’s heart that He continues to open so intimately with me and with us.  Like never before I find my time with Him something that is beyond words or explanation.  It is not a subject or truth I am knowing, but a Person…  In Their presence I forget about myself and this earth, only to awaken to my smallness and unworthiness to know such beauty as They are.  I can only ask for your prayers, that the things of God’s heart that can only be communicated by the Spirit and Person of God, could somehow reach us all, and not just the teaching or truth of it.  What a time of His visitation we are in… a time of Him opening His heart.  Such a visitation could become just that, a visitation that once it is over, the visitor leaves.  But may our hearts persuade Him to stay, to not pass us by, but find our love for Him so persuasive that He will become more than a visitor, but the permanent resident of our hearts, even as David was to Him.  I love you all, and could never express how deeply thankful I am to have the fellowship of such people like you who love Him dearly and desire to know Him at all costs.  May we keep that first love burning stronger than ever, that it will not just be a “first” flame… but a forever love for the Lamb.

Yours in Him,
Randy John chapter 12 is a 50-verse commentary on death in its many perceptions.  To truly believe in the Lamb of God is to know that death is the answer, but the question focused upon in this chapter is, “What KIND of death?”  John chapter 12 is a walk through the hearts of many discovering their perceptions of death, and how they respond.

Ministry or Honor on the Basis of Death

John 12:1-8
“Then Jesus six days before the Passover (the feast) came to Bethany, where Lazarus was which had been dead, whom he raised from the dead. 2 There they made him a supper; and Martha served: but Lazarus was one of them that sat at the table with him. 3 Then took Mary a pound of ointment of spikenard, very costly, and anointed the feet of Jesus, and wiped his feet with her hair: and the house was filled with the odor of the ointment. 4 Then saith one of his disciples, Judas Iscariot, Simon’s son, which should betray him, 5 Why was not this ointment sold for three hundred pence, and given to the poor? 6 This he said, not that he cared for the poor; but because he was a thief, and had the bag, and bare what was put therein. 7 Then said Jesus, Let her alone: against the day of my burying hath she kept this.  8 For the poor always ye have with you; but me ye have not always.”

To Jesus, it was an issue between ministry or honoring Him on the basis of death.  In the first 8 verses of chapter 12 we find a contrast between Mary of Bethany and Judas in how they relate to Him on the basis of his soon-coming death.  While Mary is found pouring over the Lord as she anoints Him for burial, Judas is uplifting ministerial needs with hidden motives of selfish gain.  Mary honored the death Jesus was about to go into as she poured out her pound of ointment in costly sacrifice.  Judas mocked the Lamb about to be offered by counting Him unworthy of even three hundred pence, of which Judas desired to use for himself while covering up his betrayal in the name of the poor.

A Death To Be Avoided

John 12:9
“Much people of the Jews therefore knew that he was there: and they came not for Jesus’ sake only, but that they might see Lazarus also, whom he had raised from the dead.”

While none besides Mary seemed to perceive the true death the Lamb of God was about to go into, many honored Lazarus’ death in regards to the fact that he was raised out from it.   The death they were honoring and seeking was, in reality, a miraculous escape from death through a miracle raising.  The truth was that these people were seeking Jesus in relation to avoiding death. “They came not for Jesus’ sake ONLY, but to SEE Lazarus, whom he had raised from the dead.”  They wanted to behold a man who has escaped death, and in like manner find hope that they too, might escape death.  Jesus was nothing more to them than the one who raises the dead; therefore, they came not to see Him ONLY, but to also check out his handiwork (Lazarus) in hopes of their own death-escape.

Opposition Seeking Him to Put Him to Death

John 12:10-11
“But the chief priests consulted that they might put Lazarus also to death; Because that by reason of him many of the Jews went away, and believed on Jesus.”

In verses 10-11 we are confronted with a death to solve problems. The chief priests held another form of death in their hearts, and that was to murder Lazarus and therefore remove the issue that was causing so much trouble.  Although death would be the answer, the death these priests were seeking was the elimination of anyone or anything causing them opposition.  They chose to seek the utter removal of that which would cause them suffering or loss.  To remove Lazarus might turn the hearts of the people away from believing in Jesus and back to them and their religious offices of self-exaltation and comfort.

John 12:12-16
“On the next day much people that were come to the feast, when they heard that Jesus was coming to Jerusalem, 13 Took branches of palm trees, and went forth to meet him, and cried, Hosanna: Blessed is the King of Israel that cometh in the name of the Lord. 14 And Jesus, when he had found a young ass, sat thereon; as it is written, 15 Fear not, daughter of Sion: behold, thy King cometh, sitting on an ass’s colt. 16 These things understood not his disciples at the first: but when Jesus was glorified, then remembered they that these things were written of him, and that they had done these things unto him.”

Jesus was coming into Jerusalem as the Lamb of God be offered at Passover, but from these verses we see that even Jesus’ disciples didn’t get it (verse 16).  They probably thought this procession with palm leaves and cries of praise was Jesus being glorified. This deathless journey was not celebrating a glorified slaughtered Lamb, but rather honoring a man who never went into death as the Messiah.  It was a misinterpreted journey to glory against death, rather than behold the Lamb who was about to be offered on Passover.

John 12:17-18
“The people therefore that was with him when he called Lazarus out of his grave, and raised him from the dead, bare record.  For this cause the people also met him, for that they heard that he had done this miracle.”

Those who had witnessed Jesus’ miracle of raising Lazarus from the dead were so impressed by someone who could get them out of death that they came to meet and glorify Him in His entrance into Jerusalem.  Their praises and adulation were based on their adoration of a resurrection that delivered someone from death.  These ones cried out, “Blessed is the King of Israel” (verse 13), having no heart for Him being a sacrifice-Lamb on His way to the altar.  The one they were calling “Lord” was one who existed to help them escape death, rather than enter into death as an offering.

An Excuse for a Death That Will Solve Problems (Murder)

John 12:19
“The Pharisees therefore said among themselves, perceive ye how ye prevail nothing? behold, the world is gone after him.”

In order for the religious people of Jesus’ day to be effective, Jesus had to be removed.  As long as Jesus was alive and among them, the hearts of the people went after Him.  In order to “do God’s service,” this “Jesus” must be removed completely, and this would require them to murder Him.  Once again, we find that “death” is the answer, but the real question is, “What KIND of death?”

John 12:20-22
“And there were certain Greeks among them that came up to worship at the feast:  The same came therefore to Philip, which was of Bethsaida of Galilee, and desired him, saying, Sir, we would see Jesus.  Philip cometh and telleth Andrew: and again Andrew and Philip tell Jesus.”

Based on the tenor of the crowds gathering to extol Jesus at the Passover feast, the excitement in their seeking was based on the man who raised someone (Lazarus) out from death.  A man who a one-of-a-kind gift that can give us all hope that we can escape death.  The word of such a “magic-man that can help us escape death” had reached beyond Israel into Greece.  It was this message of “death-escape” that was reaching the nations and drawing people from afar.

John 12:23-24
“And Jesus answered them, saying, The hour is come, that the Son of man should be glorified. Verily, verily, I say unto you, Except a corn of wheat fall into the ground and die, it abideth alone: but if it die, it bringeth forth much fruit.”

Jesus is not impressed with having this kind of followers (death escapers). He connects “glory” with a death that gives up life to one that escapes death.  It is a “fruitful death.”

Death-Escapers Do Not Escape Death

John 12:25
“He that loveth his life shall lose it; and he that hateth his life in this world shall keep it unto life eternal.”

He that seeks the escape from death (most Christians) shall have a death that does not escape it.  In other words, death comes to us all, but few willingly choose a death that involves loving the Lord more than their own life.  But for those who hate this kind of self-protecting, self-loving life that this world suggests, they will find the true Life that is God Himself and join with Him in His Nature of Sacrifice.  May we allow the Lamb to be fruitful in us by bearing in our mortal bodies His dying, to the glory of the Father and life for others  (II Corinthians 4:10). 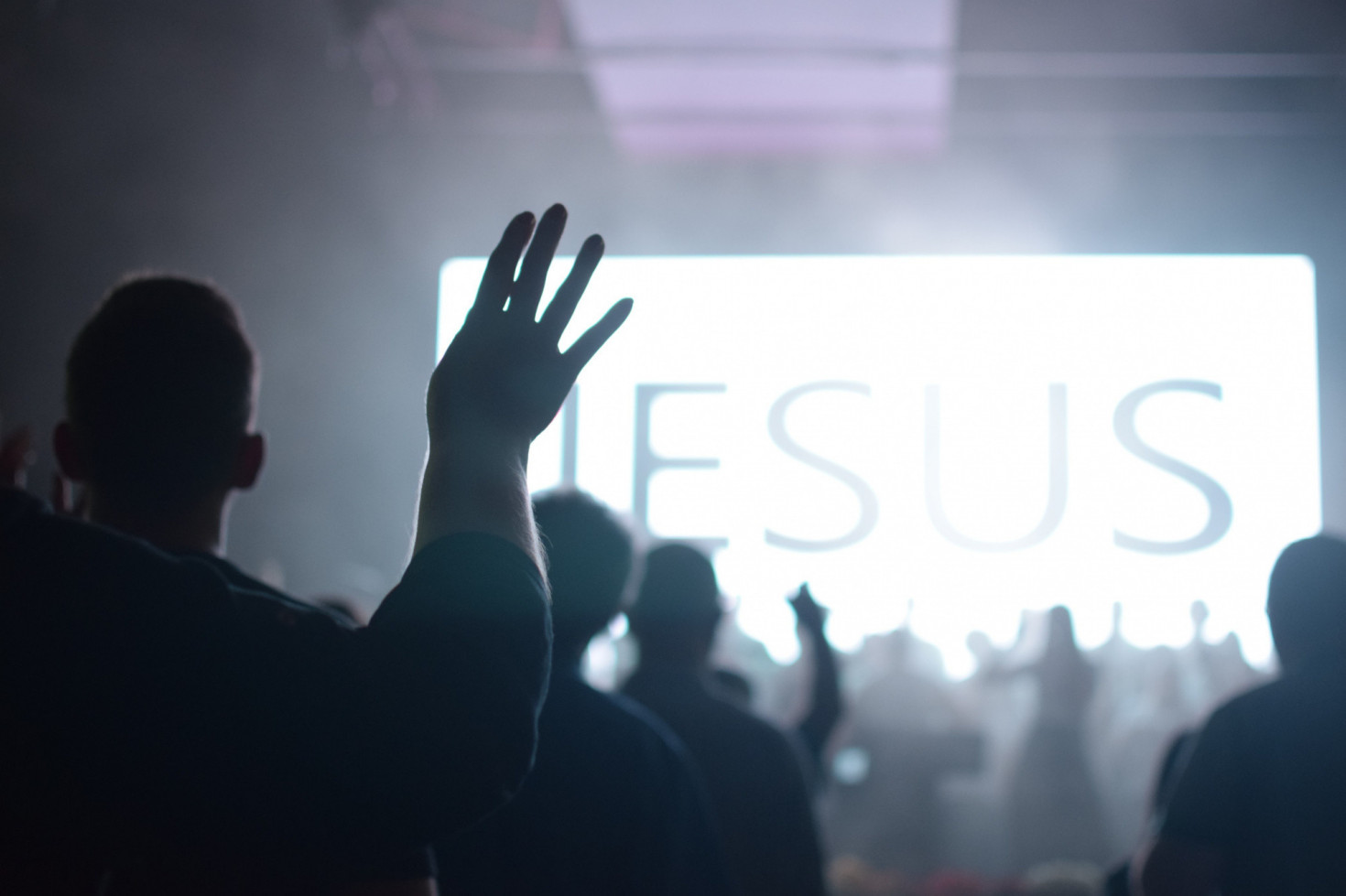 This month we are sharing a three-part series from the life of David - a deep cry from the Lord's heart to ours.
We have both the videos and the audios for you.
The videos are below for you to watch, followed by the audio recordings to listen to. 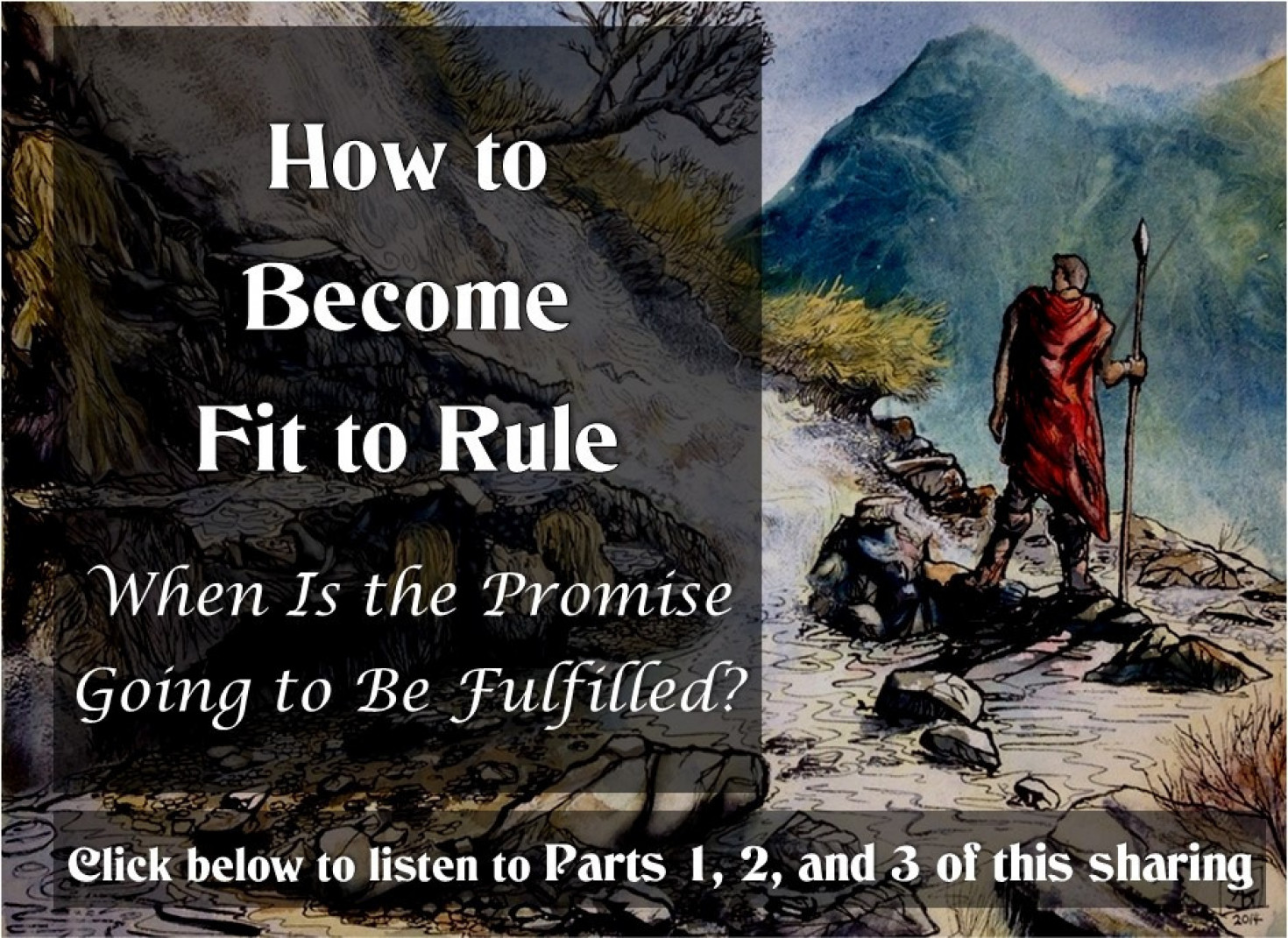 How to Become Fit to Rule - When Is the Promise Going to Be Fulfilled? (Part 1)
True Growth Begins

How To Become Fit To Rule - When Is The Promise Going to Be Fulfilled? (Part 2)
Taking the Stronghold of Zion

How to Become Fit to Rule -
When Is the Promise Going to Be Fulfilled? (Part 3)
David's Tabernacle 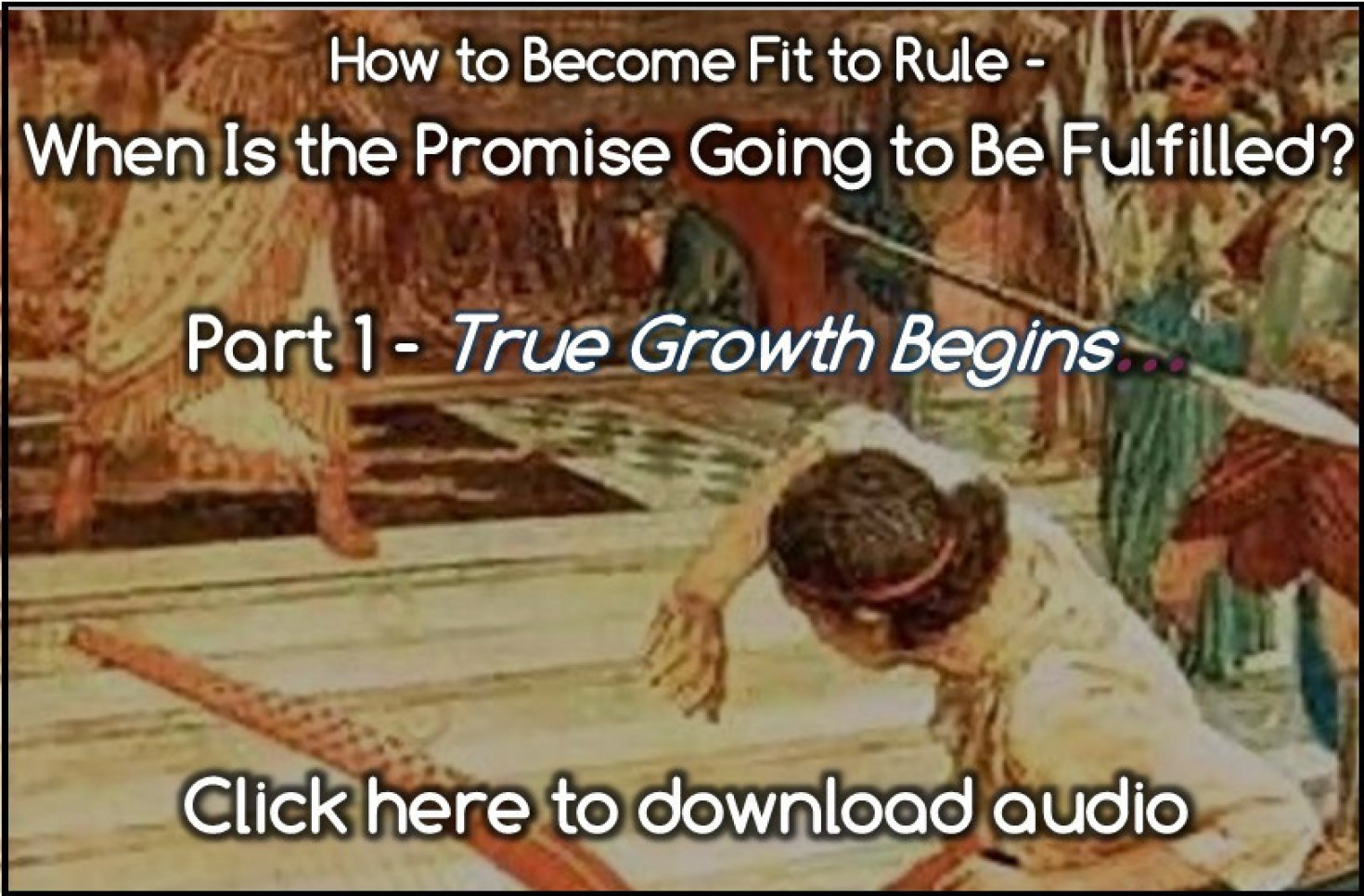 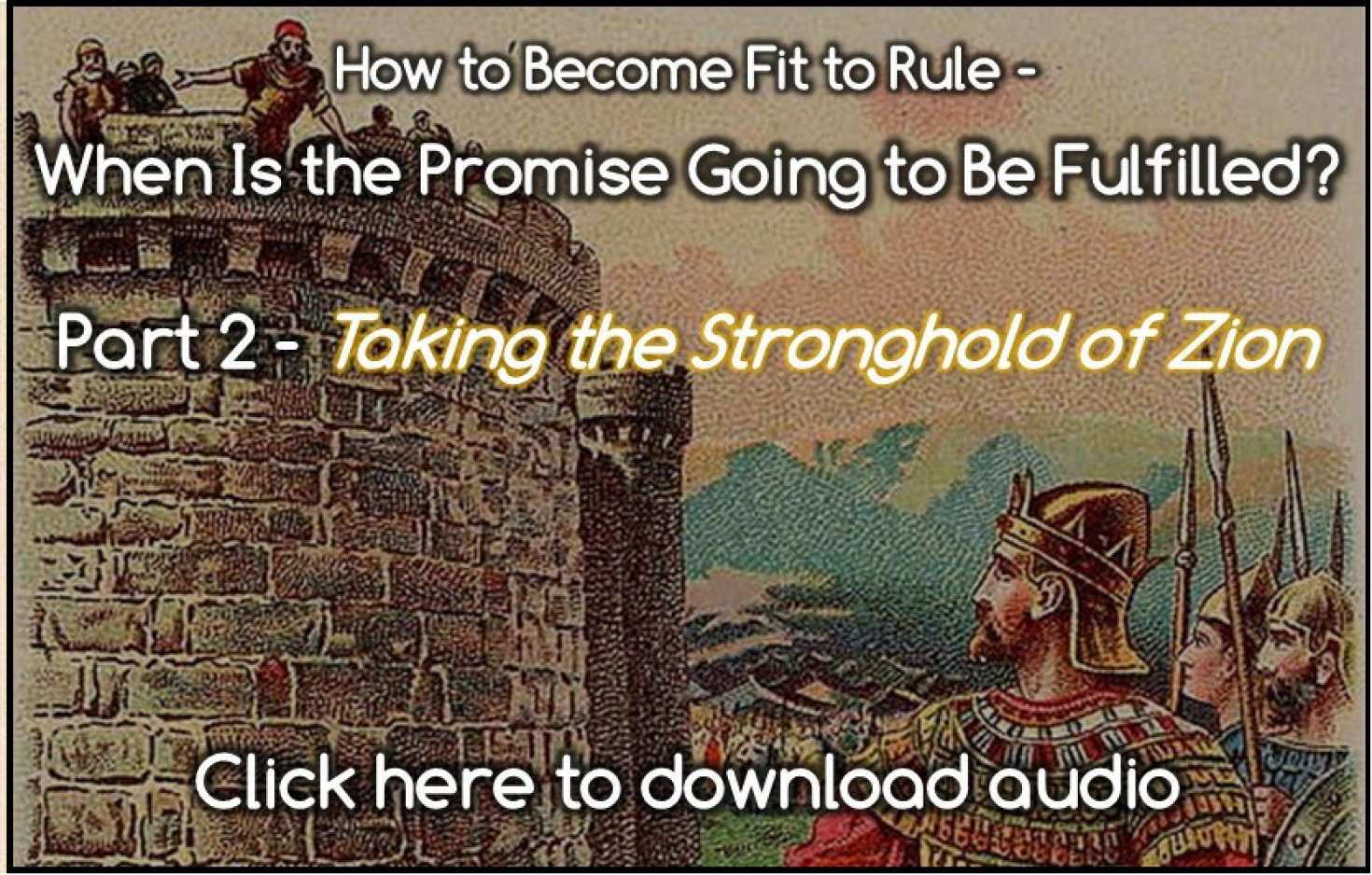 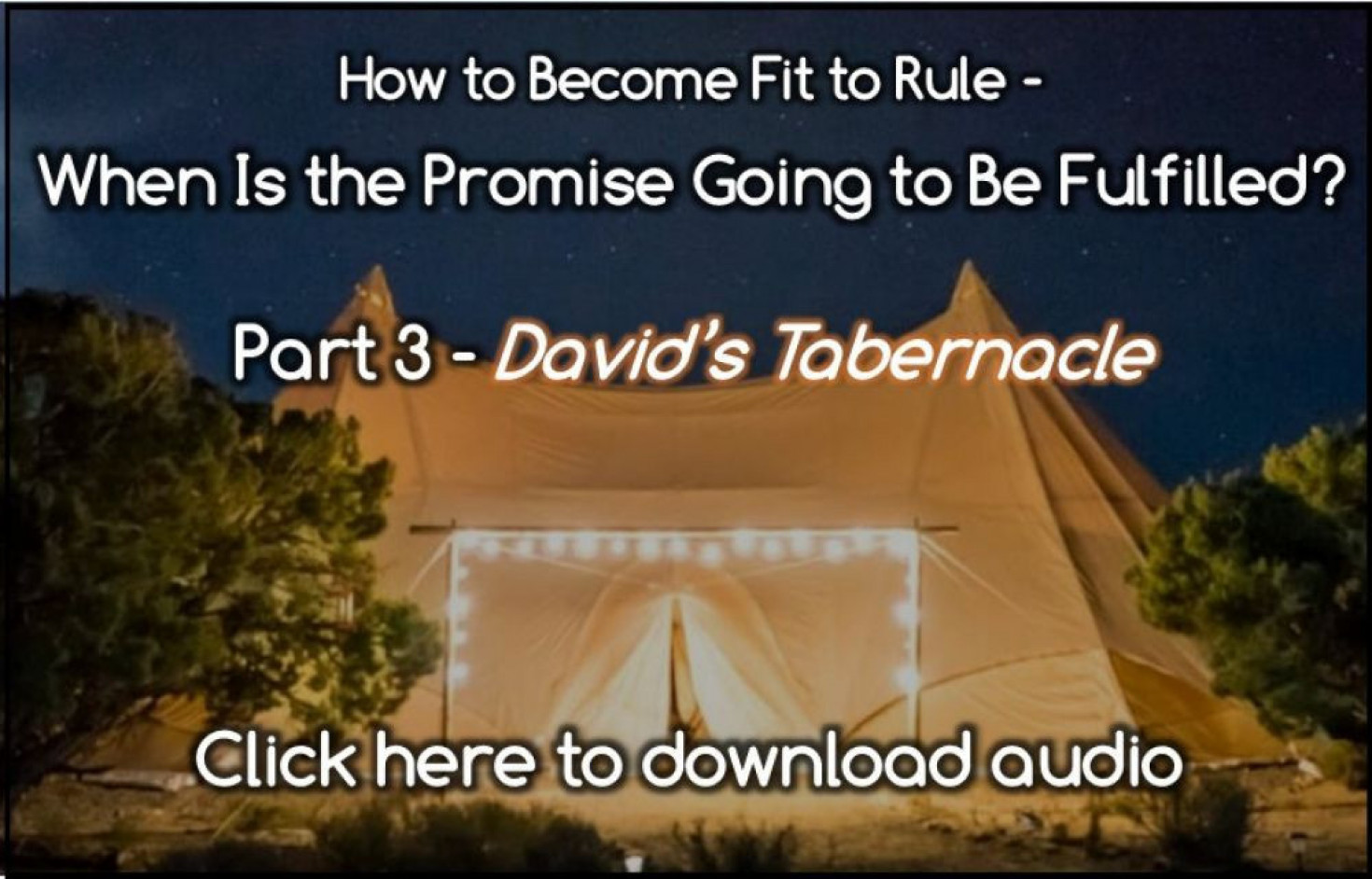