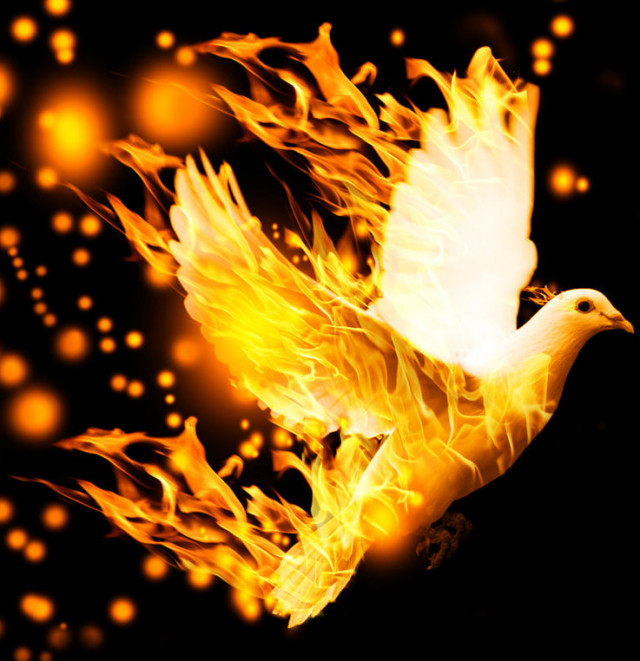 Dear Family in the flames!

From my heart I want to express how deeply you all moved me when I heard your voices and hearts respond to the Lord’s invitation to Gather in the Altar during our recent Sunday night meeting over the Gathering on Zoom.  That one meeting alone filled my heart enough for the whole Gathering, simply because I know how you must have ministered to the Lord through your prayers that were as incense rising to His heart.  It was my first experience feeling the intimacy and closeness that some of the new technology we are beginning to use brings.  I know that the Lord is moving in the midst of these new ways in our digital Gatherings to bring a deeper sense of closeness in the communion of His Life between us.  To hear your voices, see your faces, and experience the flow of His Life throughout the Jesus tribe blesses me more than I have words to express. Please continue in your prayers over all these new changes, and the heart purpose behind them.

As most of you are aware of, Life in the Spirit’s annual Gathering over Thanksgiving weekend in November is coming soon.  This year’s theme “Gathering in the Altar” came straight from the Lord’s heart, and flows perfectly with the emphasis of God’s dealing in our lives in this season.  More than almost any other time, I sense this year there is a true potential of fulfilling what is in the Lord’s heart based on what I sense in you all towards Him.  I know that hearing the call to gather in the flames as compared to jumping onto the altar and getting into the flames are two different things.  However, if we let our hearts guide us and His nature motivate us, then this year will be more than teaching, dealings, and ministry opportunities... it will literally be a corporate release of the Son through those who go into the flames and release His fragrance through these altars.  Beloved Ones, may it be so…. not for us or ours, but for THEM… Father, Son and Spirit.

With you in love and desire towards the Lord’s heart and needs,

Main Article
Instead of an article this month, may these meditations on "Sacrificial Fire" be a blessing as your heart pursues Him...
Meditations on Sacrificial Fire
The second kind is meant for the sacrifice itself, not for us.
It’s, “Darkness by arrangement,” or, “Fire by arrangement.”
We can’t tell much difference circumstantially from strange fire and sacrificial fire because it is not in the circumstances that we are going to figure this out.
It is going to be knowing the Lord and being with the Lord.

If sacrificial fire falls, we don’t call it strange fire — we are with the Lord.
We would say that God has something greater in His heart than creating the universe and us, and us stumbling around trying to figure everything out.
If all I want to know right now is my death and His life, then slowly but surely answers would start coming to everything else.
* * * * *
So sacrificial fire isn’t for you, it’s for Him, to burn up the sacrifice.
But we’re in the middle of it; you are in the way of what He is about.

The Father is thinking, “My Son..”
But not just, “My Son,” but out of that altar called “you.”
You are to be an altar by which the Father can send sacrificial fire, not strange fire.
The Father never sends strange fire; we just turn it into that.
* * * * *
Teaching this, talking about it, gives us a sense that we understand it, which is false because we don’t.
The proof is how we always react.
“Why is all of this bad stuff happening to me?”
You turned it all into strange fire, and now it’s bad stuff!
It was meant for you by Christ, to lay Him on the altar of your heart, and to give the Father His Son.
* * * * *
Jesus didn’t say, “Everything is perfect with My being.”
He said, “My soul is troubled.  But what shall I say?”
There has to be something higher at work in us than our soul because our soul is going to read everything in light of us.

If we would allow the fire to be for the sacrifice and not us, we would be covered.
Jesus said, “Not my will, but Thine be done.  Whatever this fire is, not my will, not my understanding, not how I see it — This is all soul trouble.”

He is going to leave you with your soul.
You have to deal with that by the nature of Christ and living by your spirit more than by your flesh.
* * * * *
If we change the fire’s meaning to represent something malevolent toward ourselves, then we are in danger of God allowing it to be directed towards us while we have no Lamb involved in the transaction.

Here’s one way of saying it: You’re completely out of the will of God.
We’re seeking Him and saying, “Remove this.  I want my will.”
He does do that.
But it’s sad because we miss out on a relationship between the Father and the Son that was eternally set and we were privileged to be able to enter.
Then it just feels like troubles and trials, having no eternal meaning at all.
* * * * *
The third kind is that of God Himself — a consuming fire.
With sacrificial fire, He falls on Christ crucified within us and consumes Him as the acceptable sacrifice.
In the example of Nadab and Abihu, He is a consuming fire that burns up all that pawns itself off as acceptable apart from the Lamb.
These two explanations together teach us something major concerning who He is and the basis upon which He moves and reacts.
* * * * *
So God kind of likes sacrifice.
But it isn’t about lambs or about us being sacrificed.
It is about us being with Him in that sacrifice; therefore “I am crucified with Christ.”
It is about Him and His relationship with the Father.
* * * * *
Hebrews 12:25, 28 — “See that ye refuse not Him that speaketh.  For they escaped not who refused Him that spake on earth, much more shall not we escape if we turn away from Him that speaketh from heaven.  Wherefore, we receiving a kingdom which cannot be moved…”
We have been brought into a kingdom that cannot be moved.
But we don’t want to refuse Him in the process.
We don’t want to get all wrapped up in the Kingdom.
Our hearts belong to Him — because His heart belongs to us.
“I will give them a new heart.  I will put My heart, My Spirit in them.”
Your goal should be to realize this in the truest, most spiritual sense of reality as He understands it.
* * * * *
Hebrews 12:28-29 — “Let us have grace, whereby we may serve God acceptably with reverence and godly fear.  For our God is a consuming fire.”

If He has given us a kingdom that cannot be moved, and we have grace whereby we serve Him correctly, then the consuming fire is fire falling on the Lamb within us!
That’s what it’s about!
Song
click the image below to listen to and download
"Consuming Fire Upon My Soul" 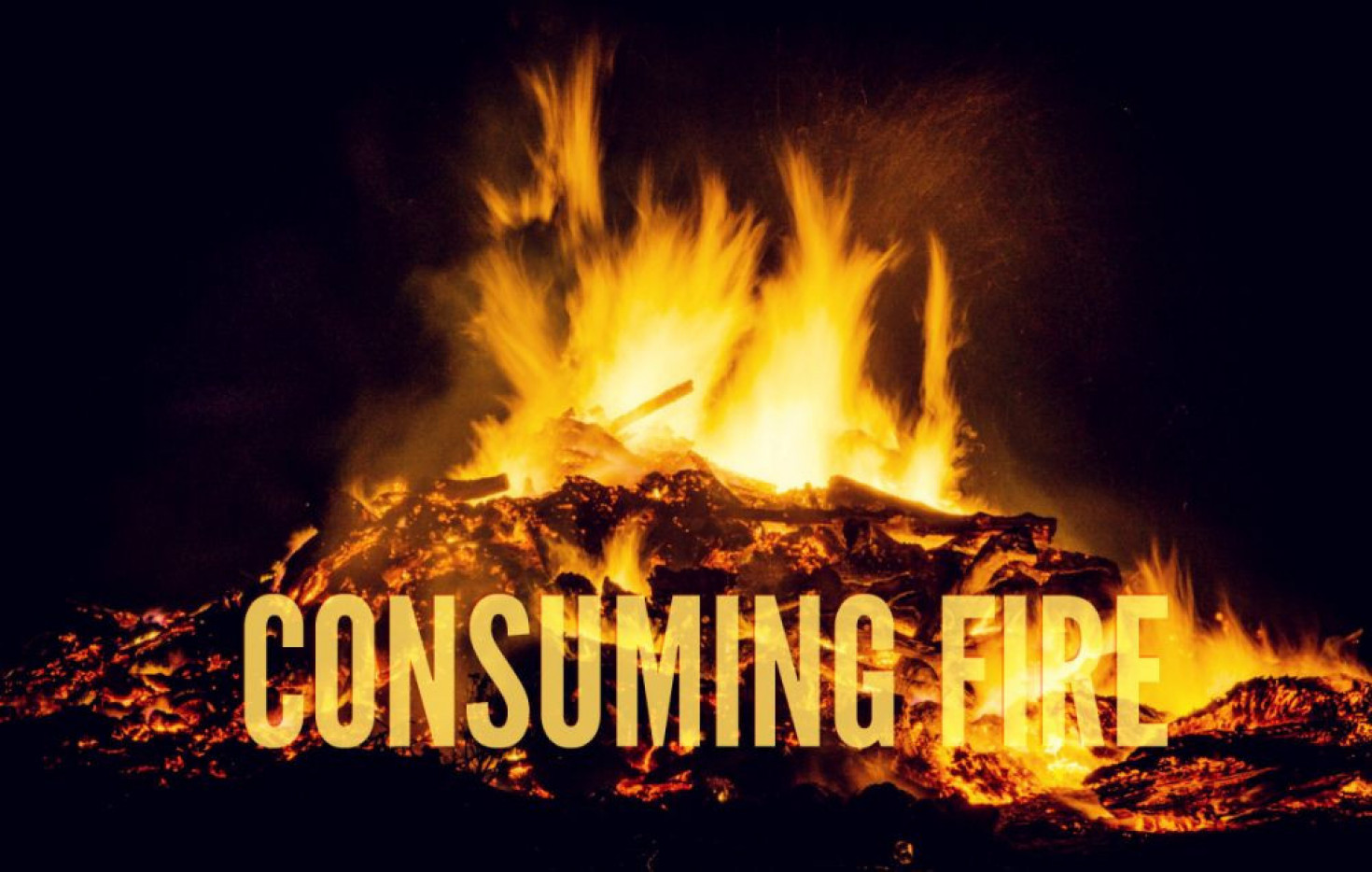 Consuming Fire Upon My Soul

Videos
The videos this month are a blog from some time ago that is deeply relevant to us now, and the most recent class from "1st Peter Revisited"! 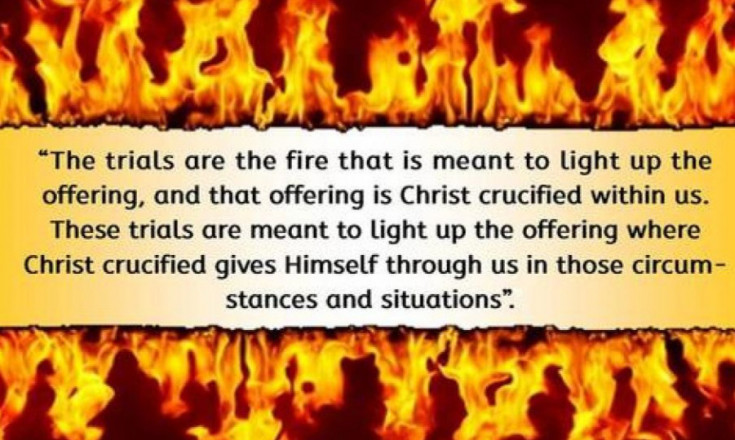 "Why is Sacred Fire So Strange to You?"